The territory of the Kamianska Sich National Park has been completely freed from the Russian invaders! 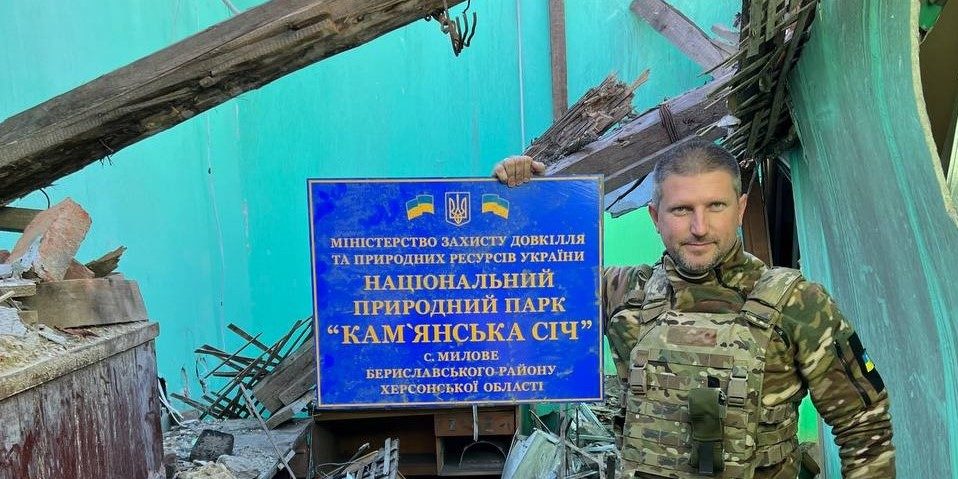 The news about the liberation of the national park is extremely joyful, but the fact that during the 8 months of occupation the infrastructure of the park suffered a lot is saddening.

The russians stole almost all the property of the national park: cars, boats, quadcopters, a thermal imager, and a weather station. And in the photo you can see the destroyed building of the administration of Kamianska Sich, as well as the director of the park Serhiy Skoryk, who participated in the liberation of the national park.

In the first half of this year, there were many fires in the national park. Employees of the park, despite the occupation, remained at their workplaces and… put out fires!
For a long time, due to the presence of the russian military, it was almost impossible to record the damage caused by them.

Only in the middle of October, thanks to satellite analysis, it was possible to calculate that almost 635 hectares of valuable plots were burned on the territory of the national park. It was here that vulnerable Red Book species grew. From February 24 to October 18, the fires destroyed rare species within the park: Genista scythica Pacz (633 specimens), Stipa asperella Klokov et Ossycznjuk (402 specimens), Stipa capillata L (832 specimens), Stipa lessingiana (2384 specimens), Stipa ucrainica P (456 specimens) and others.

Damages are still being assessed.
Now the national park and its employees need help.

You can support the NPP “Kamyanska Sich” at the link: https://uncg.org.ua/save-wildlife-in-war/