Defending themselves against the Ukrainian Armed Forces, the russians destroy nature reserves 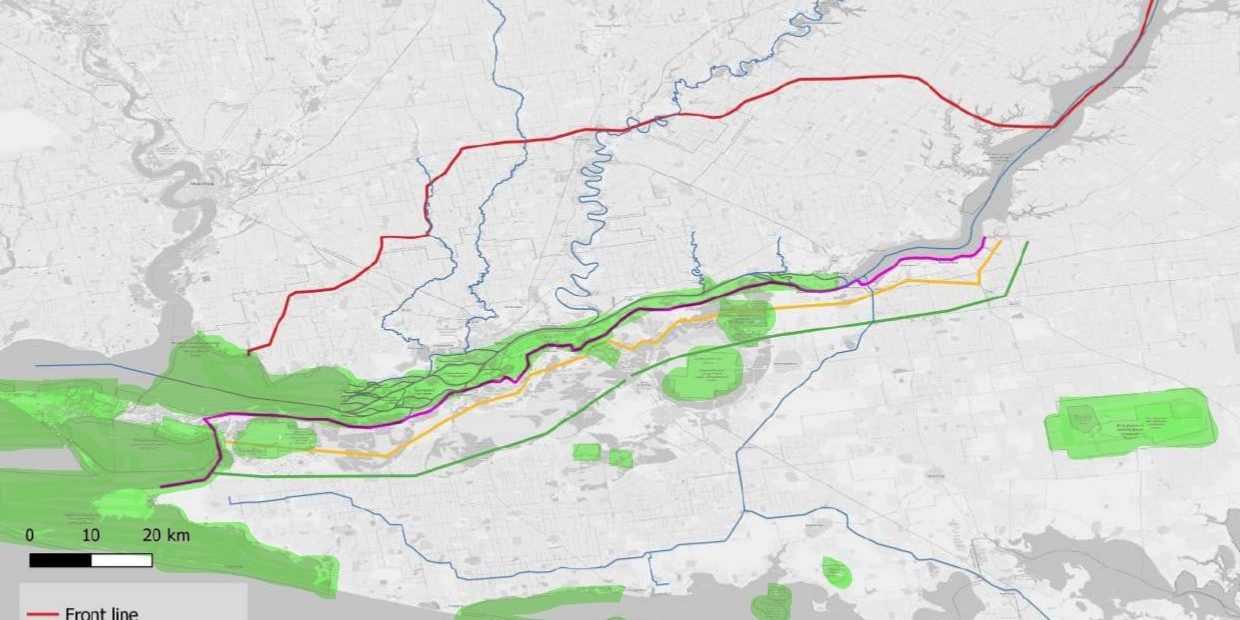 Russian troops have begun construction of a powerful fortified area along the left bank of the Kherson region in Ukraine. An approximate scheme of the “defense lines” (Map of the russian defense lines being built on the right bank of the Dnieper 11/05/2022) posted the @COUPSURE channel on Twitter. Analysis of satellite images confirms this location of the Russian “defense lines”.

This news has not only military but also environmental significance. A simple overlay of “defense lines” on the existing territories of the nature reserve fund (shown in green on the scheme) makes it clear that the fortifications construction will be held on the extremely valuable territories of the Black Sea Biosphere Reserve, as well the national parks “Oleshkivski Pisky” and “Nyzhnyodniprovskyi”, landscape reserve “Sagy”, forest reserve “Berezovi Kolky”, zoological reserve “Korsunsky”, botanical reserves “Shaby” and ” Khrestova Saga”, protected tracts “Malokakhovskyi Bir”, “Oleshkivskyi (Tsyurupynskyi) pine forest”, “Holoprystanskyi acacia forest”, ” Starozbur’ivskyi acacia forest”. A number of natural monuments are also in the zone of the “defense line” construction: the zoological natural monument “Krynkivske settlement of beavers”, the botanical natural monuments “Vikovi platany”, “White acacia wood”, and also natural oaks – the remnants of the historical Gilea in the Zburyivske forestry and hunting state company – which are declared as natural monuments. The Black Sea Reserve was the first in Ukraine and even in the former USSR to receive a UNESCO biosphere reserve certificate (1980).

A large number of extremely valuable natural areas designed for the conservation will be affected, in particular: the national natural park “Valley of Kurgans”, the reserves – “Kardashynske Swamp”, “Korovodynskyi”, “Vyazemskyi”, “Yagorlytskyi Steppe”, “Zabaryne”, “Alder Sagas”, “Pylyptsevi Lakes” (more details about the planned objects of nature reserve fund of Kherson region – on our website).

Irreparable damage will be caused to the European ecological network. In particular, the “Kinburnska spit”, “Oleshkivski sands”, “Kakhov reservoir”, “Nyzhniy Dnipro”, “Dniprovsko-Buzky estuary” sites of the Emerald network have already been affected by Russian aggression as well as the “Dnipro Delta” and “Yagorlytska Zatoka” Ramsar wetland sites. 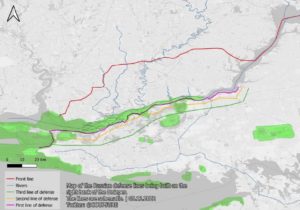 Populations of more than a hundred species of international, national and regional protection, Green Book of Ukraine phytocenoses, habitats of the Berne Convention Resolution 4 continue to be destroyed due to the construction of fortifications. Serious damage was caused to psammophyte (sandy) steppes, unique birch, oak and aspen stilt forests, floodplain and relict floodplain alder forests, saline meadows, natural swamps and lakes, etc.

These actions pose a particular danger for the psammophyte steppe. Such unique areas are of concentration of many rare animal and plant species. Some of them are endemic (some that are not found anywhere else). Among plants endemic species, for example, Agropyron dasyanthum (IUCN Red List), Betula borysthenica (Red Book of Ukraine), Centaurea breviceps (Red Book of Ukraine) and others will be affected. Also sands are no less valuable for animals. For example, the sandy blind mole-rat Spalax arenarius is found only on the Lower Dnipro sands, it is included in the Red Book of Ukraine and recognized as a species that has a high chance of extinction at the global level (according to the IUCN Red List). A unique subspecies of the thick-tailed three-toed jerboa Stylodipus telum is the S. falzfeini – also found only here. According to experts, approximately 60-70% of the world population of the Nordmann’s birch mouse Sicista loriger is also concentrated in the Kherson region, primarily in the areas of the Black Sea Reserve, on the Oleshky sands and in the Saga tracts. Among rare insects, for example, this territory accounts for a significant percentage of domestic populations of the following species: praying mantises Empusa pennicornis, Iris polystictica, bush cricket Saga pedo, Bessarabian turun Carabus bessarabicus, western giant antlion Acanthaclisis occitanica, Medvedev’s leaf-flower, saturnia mala Saturnia pavonia, Sooty orange tip Zegris eupheme, Colpa klugii, Anoplius samariensis, Cryptocheilus rubellusa, Stizus bipunctatus, Stizus fasciatus, Cerceris tuberculata, Satanas gigas and many others. And we have already written about the fact that whole the population of the Tapinoma kinburni is concentrated only in Ukraine and only on this area.

The construction of trenches, fire pits and other structures destroys already small areas of the steppe, roots out the natural vegetation and very quickly ruins the humus layer, which leads to the sands scattering. We should not forget also about the network of sandy roads, as a huge amount of heavy equipment (massive equipment for digging, in particular) can move. Deep trenches will become as death traps for terrestrial animals – amphibians, reptiles, mammals and wingless insects.

Significant damage will be caused to the natural forest vegetation which are the remnants of the “Gilea” historical area. There is a massive felling of trees to strengthen military positions and heating. Almost all natural tree species here are rare and subject to protection: Betula borysthenica is included in the Red Book of Ukraine, while the common oak Quercus robur, common alder Alnus glutinosa and common ash Fraxinus excelsior are included in the Red List of the Kherson region.

Digging trenches can lower the level of groundwater, which will negatively affect the vulnerable natural ecosystems of small forests and virgin areas of sandy steppes on this territory. The level of the earth’s surface by the sea is so low here that is regularly flooded with encroaching sea waters. The trenches will probably be easily flooded by the first sea surge of the sea. However, this will also contribute to the local shore erosion. Moreover, at a depth of at least 1-1.5 meters there is the natural water level.

However, these are not all threats. Active hostilities are numerous artillery and aviation shellings of military equipment. All this will lead to a “lunar landscape” formation in the middle of the protected steppes. Numerous explosions will not only kill Red Book animals and plants, but will also cause fires in the entire Lower Dnipro sand region. Natural steppe vegetation of protected tracts and unique birch-oak and alder forests will be destroyed, and monoculture pine plantations will serve as “fuel” for the fires spreading. Kherson Oblast suffered large-scale fires even during peaceful life due to the foul practice of “steppe afforestation” with the pine monocultures growing. But the fires of 2007 are nothing compared to the expected scale of fires and destruction.

Psammophyte steppe is perhaps the most vulnerable steppes type, because it is very easy to destroy and turn into a desert. The restoration of anthropogenic deserts takes decades. This is evidenced by the so-called Oleshkiv desert in the Kozachelager sand arena of the Oleshky sands, which is now called “the largest desert in Europe”. The process of its overgrowth has been going on for over 100 years, but it is still far from being finished. The activities of the Russian military can turn all the Lower Dnieper sands into a similar anthropogenic desert, but ten times larger, and then there will be no doubt that this desert will be the largest in Europe.

Especially dangerous there is a prospect of the fortified area military liberation planned by the Russians. We sincerely hope for the talented decisions of Ukrainian military strategists, who can liberate the south of Ukraine without significant damages to the territory.