The Great Stalin Plan for the Transformation of Nature: HOW WAS THE NATURE OF UKRAINE DESTROYED UNDER THE SOVIET UNION? 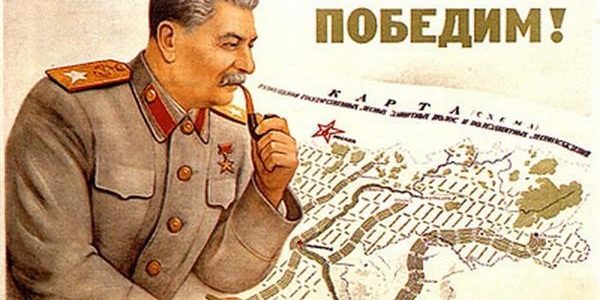 Breaking up with Russia, we should finally break up with our common Soviet past, where myth-making was almost the basis of state policy. In this article, we would like to debunk one of the myths of Soviet propaganda without naming it. Instead, let us analyze what were the consequences of the implementation of Stalin’s plan for the transformation of nature.

“We cannot seek mercies from nature; taking them from it is our task”

Every screwdriver of the Soviet mechanism had to work to build a better life – first socialism, and after 1935, when socialism seemed to have been built, communism. Everyone had to work for a bright communist future – adults and children, workers and peasants, scientists and cooks, and… rivers, forests, swamps, and virgin lands. Nature was no exception and, according to a well-known saying, was owe to the collective farm.

Russian biologist Ivan Michurin, following Soviet ideology, once said: “We cannot seek mercies from nature; taking them from it is our task”[1]. This principle fits perfectly to the “The Great Stalin Plan for the Transformation of Nature “, the implementation of which was planned during 1948-1965.

The plan provided large-scale interference in the natural environment for the “good of Soviet society.” It was necessary to transform nature to mitigate the climate in arid areas (from the steppe regions of Ukraine to Altai). These measures were to provide higher yields. And if the west tried to gain success in agriculture through a technological breakthrough, the country of the Soviets for this either mastered new territories or changed the existing ones for the needs of agriculture.

This “brilliant” idea was pushed by the drought of 1946, when the part of the grain was exported by the USSR as an aid to the countries of Central Europe (the creation of a socialist camp had to be financed). And also post-war devastation, and famine. Who is to blame? Weather (read “nature”). The country could only be saved from collapse, as they wrote in Soviet encyclopedias, by the genius of Comrade Stalin (interestingly, this genius, however, not only Stalin, led the country to collapse).

In Ukraine, according to Koba’s plan, they had to create several thousand kilometers of state forest belts on agricultural land, build canals and irrigation systems, drain large areas of previously unused land, and farm on them; to build powerful hydroelectric power plants on the Dnipro.

Field-protective forest belts: a good idea, but it didn’t work out

The creation of field-protective plantings in the country of the Soviets had positive consequences on the agriculture of the southern and eastern regions of the Ukrainian SSR. Yields have increased. “The effect of planting field-protective forest strips on the yield of the fields protected by them ensured an increase in the yield of grain crops by 25-30%, vegetable – by 50-70%, herbs – by 100-200%” [2].

However, the problem of droughts and dust storms did not arise in 1946: from 1892 to 1983 The Russian Empire, and subsequently the USSR, experienced at least 27 severe droughts [2].

In the empire, the question was tried to solve by a professor at St. Petersburg University, Vasil Dokuchaev. After the drought of 1891. the scientist developed a plan to combat droughts, particularly in the south of Ukraine. Part of the plan was to create forest belts. The conclusions of Dokuchaev formed the basis of the Great Stalin Plan, and not the “genius of Stalin”, as it may seem at first.

However, the implementation of the correct Dokuchaev ideas was weak. At the time of Dokuchaev, the specialists were engaged in forest belts, but they were no longer engaged to the Stalin plan. Performers did not always understand the regional features of steppe ecosystems. There was not enough money, and local authorities’ negligence interfered. In 1953, the plan in terms of field-protective forest plantations was curtailed. In such cases: voluntarist Mykyta Khrushchov was not interested in creating field-protective forest belts. He was interested in corn…

However, after the dust storm of 1969, the government of the Ukrainian SSR decided to finalize the Stalin plan. For several years, various resolutions were adopted that would have completed what had been started in 1948. But the volumes of planted little resembled a reliable system of field-protective afforestation:

Since 1971, within 20 years, 154.5 thousand hectares of field-protective forest belts were planted.

Since 1950, within 10 years, 440 thousand hectaresof field-protective forest belts were planted [2].

Man-made seas – was it necessary?

What the creation of a large number of reservoirs on the Dnipro led to?

More than 3 million people lost their property or were forced to move from their small homeland. To create man-made seas, 709.9 thousand hectares of land were flooded, of which

Due to the regulation of the Dnipro (564 reservoirs were created in the river basin), areas of constant groundwater standing and flooding were formed. The silting of small rivers and the loss of their draining ability caused systematic flooding from 400 to 700 settlements and 60-200 thousand hectares of agricultural land [2].

Unique natural landscapes were destroyed. Velykyi Luh – a natural complex with forests, lakes, which occupied up to 80,000 hectares between the Dnipro and the tributary of the Kinka River, was almost completely buried under the waters of the Kakhovka reservoir.

The hydrobiological regime of rivers and lakes has undergone negative changes, as well as water quality and fish productivity. Because of the standing water in the Dnipro reservoirs, its eutrophication has become commonplace. The species composition of the animal and plant world has decreased. The construction of the Kakhovka and Kremenchuk hydroelectric power plants blocked the course of spawning with sturgeons, of which there were previously many in the Dnipro. Other species of fish have disappeared in the river – salmon, Black Sea-Azov sturgeon and herring, beluga, thorn, and river eel [2].

No one took into account that the construction of reservoirs will lead to a change in the shape of the coastal slopes. Due to coastal collapses, gully floodplains were flooded due to flooding. Thus, a lot of damage was caused to valuable land, roads were eroded, and fertile layers of soil were washed away [2]. It became necessary to strengthen the coastlines, which required and requires significant funds.

Due to the aging of dams, the risk of their destruction increases over time. Repair work also requires significant funds.

Historical heritage also suffered. For example, during the construction of the Kyiv reservoir, thousands of monuments of history, archeology, and culture were destroyed due to flooding (more than 300 settlements of the Ancient Rus era alone). Flooded also settlements mentioned in the XI century. (e.g. Starosillya). It is known that in Starosilla there was a summer laboratory of the biological station of the Ukrainian Academy of Sciences, founded in 1918 by Vernadsky [6].

From the Stalin plan also suffered the Ukrainian Polissya, which the authorities wanted to drain to “conduct effective agriculture.” According to the plan, for 15 years in the Ukrainian SSR was to drain 1897 thousand hectares. However, after the start of the campaign, it turned out that the number of mowed grasses on drained lands decreased. In the Pripyat basin, many rivers were fully or partially directed and canalized. Due to the drainage of biodiversity impoverished, many aboriginal species, including 31 species of vascular plants and almost 20 species of land mammals, were lost [2].

Not only the swamps themselves suffered from the drainage but also the adjacent territories. For example, in 1948, at the initiative of Khrushchov, active reclamation work began on Irpin river. In a few years, the floodplain of the river was destroyed, and the river was turned into a canal.

Drainage of wetlands was primarily carried out in violation of technological requirements. There needed to be more specialists.

The areas of territories destroyed by the drainage are impressive. Researcher Hanna Chepurda cites the following data: “In the same Zhytomyr region in 1959, the drainage of meadows, pastures and over moistened lands was carried out on an area of 6362 hectares… In 1959, the collective farms of the Volyn region prepared for the economic use of more than 5000 hectares of wetlands, where reclamation and cultural works were carried out (uprooting trees and shrubs, cutting bumps, leveling the surface, clearing the land from stones, land reclamation plowing, flooding, etc.). In total, unproductive forage lands of more than 25000 hectares were plowed”[2]

In general, in the second half of the XX century 1130 drainage systems were built in the USSR. Most of them worked unstably, needed constant care, and were sometimes quite expensive. Often, drained land was never used for agricultural needs, or was used rather inefficiently.

In developed countries, the drainage of swamps is recognized as unprofitable, in some states it is forbidden to do so by law due to the value of marsh ecosystems. It is equally important that the process of drainage of wetlands accelerates climate change through the release of carbon dioxide…

Dozens of articles can be written about the attitude of the Soviet authorities towards environmental protection, analyzing various aspects and periods of existence of the country of the Soviets. Indeed, in a totalitarian state, both the party and the citizens sincerely shared their obligations to value and protect nature. The myth of caring for the environment in the USSR always begins, like many others: “But here in our time…”. However, even a small analysis of the implementation of a large-scale campaign to transform nature utterly breaks the stereotype of a careful attitude to nature in the Soviet Union. Instead, it is an illustrative example of what in the modern world is called “ecocide” – ecocide for the sake of increasing production, modernization, technological progress, and, ultimately, for the sake of surpassing the West. Or just so that each of the collective farms and state farms could say, competing with neighbors, that not a single hectare of land “walks” on its territory.

Can we talk about the success of these races? Not. However, we can conclude that the economic development of the state is impossible without taking into account the interests of nature.