How russia’s war against Ukraine can affect birds 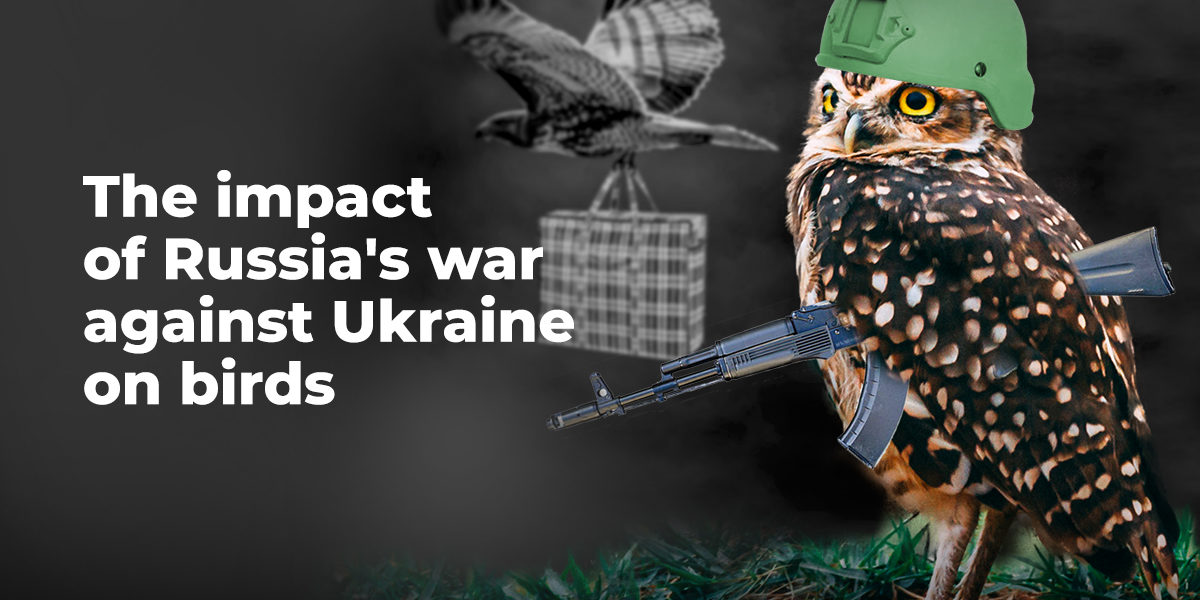 Russia’s war against Ukraine has been going on for a month. The consequences of its impact on the environment of our country have yet to be assessed in the future. Today we will reveal the possible impacts of the war on the bird population.

A striking example of the impact of the war on birds was Russia’s invasion of eastern Ukraine. After the establishment of the Meotida National Nature Park in the Donetsk region in 2009, the park staff imposed a complete restriction on visiting the upper part of the Kryva Spit on the Azov coast. The consequences did not take long – the number of wetland birds increased rapidly. In particular, the Pallas’s gull (Ichthyaetus ichthyaetus), listed in the Ukrainian Red Book of an endangered species, began to nest en masse – the size of the nesting colony quickly reached 3,000 and it became the largest colony of this species in Europe. It was on the Kryva Spit that the Dalmatian pelican (Pelecanus crispus) began to nest in Ukraine for the first time – the colony numbered 17 pairs. The population of the Eurasian oystercatcher (Haematopus ostralegus) has also increased. And the number of Sandwich tern (Thalasseus sandvicensis) in this place reached about 60 thousand pairs. All this nesting group disappeared at the same time in 2015, when Kryva Spit began to be used by the Russian occupiers for landing and other purposes. As a result of the occupation, the National Park Security Service ceased to function. In the following years, only small-billed terns continued to nest here in small numbers.

Wetlands of the Azov-Black Sea coast of Ukraine today continue to play an extremely important role in preserving the populations of many bird species on a European scale. Not surprisingly, this is where the Black Sea Biosphere Reserve, Azov-Sivaskyi NNP and other nature reserves are located, which provide their protection. After all, there are thousands of colonies of different species of martins and terns, waders and other wetland birds. During the new stage of Russia’s war against Ukraine in 2022, the Azov-Black Sea coast within the Donetsk, Zaporizhia and Kherson regions is under temporary occupation. As a result, nature reserve protection services are often unable to perform their functions. We will find out the consequences of this later.

Another vulnerable group of birds from hostilities are species that nest in forests. The greatest risks in such ecosystems for birds are fear of fighting, deforestation, fire (due to shelling and deliberate arson), and so on. On the territory of modern military operations in the north of the country, there are significant (on the scale of Ukraine) nesting populations of species listed in the Ukrainian Red Book of the endangered species – black stork (Ciconia nigra), Lesser spotted eagle (Clanga pomarina, Aquila pomarina), White-tailed Eagle (Haliaeetus albicilla), snake Short-toed snake eagle (Circaetus gallicus), Common crane (Grus grus), black grouse (Tetrao tetrix). In the eastern part of Ukraine, there are nesting groups of white-tailed eagle, The booted eagle (Hieraaetus pennatus), Eastern Imperial Eagle (Aquila heliaca), Common crane, Eurasian eagle-owl(Bubo bubo). They are potentially affected by the above factors, but are likely to be local in nature and will not have a significant impact on populations.

In general, the impact of the war in Ukraine on birds will depend on the duration and intensity of the negative factors.

New laws for the reclaim of protected areas by farmers!
3rd June 2022

Should the Oskil Reservoir be rebuilt after the war?
31st May 2022