Destruction of the Irpin Dam by the occupiers: the consequences for nature and people? 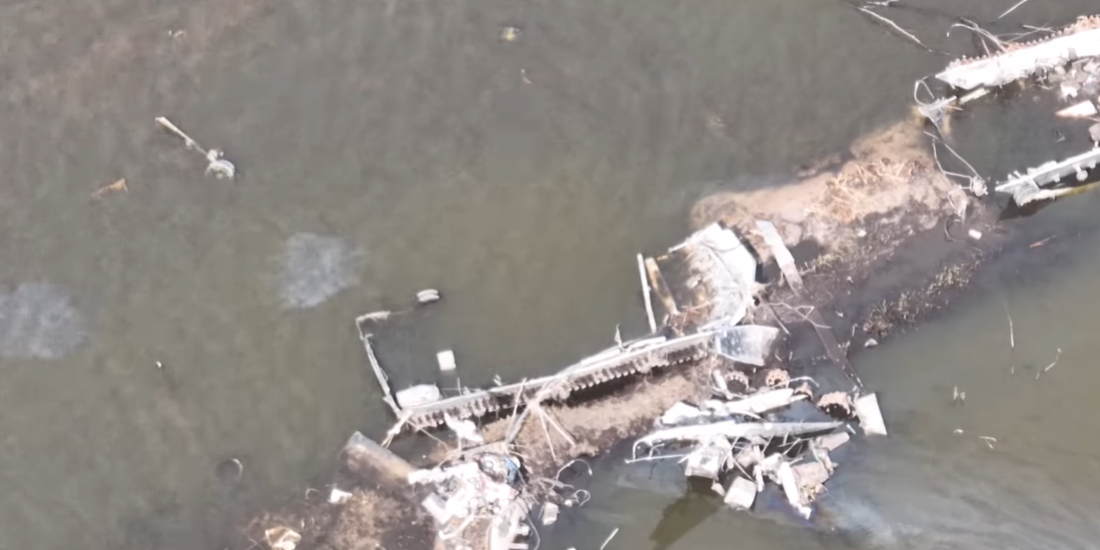 February 26 near the village Kozarovichy russian troops destroyed the dam that separated the Irpin River from the Kyiv Reservoir. In a month and a half, water from the reservoir flooded the Irpen floodplain up to Gorenka, which is more than 20 kilometers upstream. Now the water reservoir of the Dnieper tributary in its widest place (near the village of Demidov) reaches two kilometers, which will greatly complicate a possible attempt to force it by the russians. There is nothing supernatural about the fact that the water rises in the direction from the mouth. Even when the Kyiv Reservoir was filled in the 1960s to its normal supporting level (103 m above sea level), the mouth of the Irpen River (100 m above sea level) was below its erosion base. This was the reason for the construction of a dam and a pumping station, which pumped river water to the reservoir. The watercourses of other tributaries of the Dnieper (Trubizh, Tyasmin) are directed in a similar way.

First of all, the flooding of the Irpen floodplain by reservoir waters was felt in the villages of Kozarovichi and Demidov, which was reported during their temporary occupation. And as of April 7, 2022 (40 days since the dam was blown up), flooding reached the outskirts of the villages of Guta-Mezhyhirska, Chervone, Moshchun, Gorenky and the village of Gostomel, flooding the coast 107 meters above sea level. The water stopped 1 km from the administrative border of Kyiv and could potentially rise higher. So, we have to talk about the inevitable negative consequences of the spill.

At first glance, the Irpen flood helped solve the problem of distribution of floodplains contrary to the requirements of the Water Code of Ukraine for construction or plowing. It is obvious that at least during the next year they will not be developed, as they have turned into a shallow lake with an area of ​​2842 hectares. However, part of the flooded and already plowed areas has probably been treated with organic fertilizers since the fall. Now they are dissolved in water. Also partially flooded some households in the villages of Kozarovichy and Demidov, flooded construction sites on the Irpen floodplain (such as residential complex Khutir Demidovo) and flooded chaotic landfills, which together have a huge impact on the ecological condition of water bodies, threatening the spread of infectious diseases. This will not happen immediately, due to a certain chain of reactions. In order to trace them, we can take the example of a model of heavy summer floods in recent years. According to the Government Courier, Ukraine has the largest number of mine wells in Europe. At the same time, we are almost in last place in the region in terms of access to high quality water. People drink water from surface (unprotected) water horizons. It has a very unstable composition, and the quality depends mainly on precipitation and “other factors. The “other factor” took place in March 2022. In the case of such large-scale flooding in the first place is the presence of centralized water supply and sewerage systems. It is clear that not all owners of flooded estates were able to connect to centralized sewage systems, some decided to save and use latrine pits. Mixing untreated drains with the waters of the Irpin River and the Kyiv Reservoir starts the process of water contamination; the catalyst is the standing nature of the newly formed reservoir. It is almost impossible to count the number of latrine pits and wells in the floodplain, but we must remember the possible danger.

It is also difficult to draw an unambiguous conclusion about the danger of flooding of gas stations in the village of Demidov, tire fitting and metal depots. This is a list of only actually flooded infrastructure. The question of where the water from the reservoir will go remains open.

Since the deoccupation of Kyiv region, videos and photos of abandoned russian scrap metal – tanks and other military equipment – have been spreading through the network. And here we are not the first to rejoice at the logistical failures in the occupier’s army. After all, the capacity of tanks with fuel tanks ranges from 500 to 1600 liters; lubricating tanks – about 100 liters (average data, we did not analyze specific brands). We don’t even want to imagine how many tons of diesel and oil would have entered the waters of the Dnieper if the occupiers’ canisters had been completely filled! At the same time, a certain amount of oil leaked there. Lubricants and diesel fuel contain lead and other heavy metals, polycyclic arenes present in all heavy fossil fuels and a number of other organic and inorganic compounds. When they come to the surface of the water, they form stains, and then films that emulsify and settle to the bottom of the reservoirs. Getting these agglomerates into the body of fish leads to the destruction of gill tissues and intestines, mucus secretion, respiratory disorders, water and salt metabolism. Of course, the use of such water on the farm leads to very serious reactions in the human body. It is quite possible to purify water at the same time. But this requires at least a laboratory analysis of water samples, which is not the time.

As for the fish population, it is possible to conduct a fairly detailed preliminary assessment of the impact of such significant changes in the landscape. Do not think that increasing the area of ​​water is definitely a good factor for fish. The opening and flooding of the shallow estuary, on the one hand, is promising for spawning fish from the reservoir. This happened in the past with the mouth of the Sula River. Sulina Bay, formed on the site of a flooded natural mouth, became an ichthyological reserve, and later – the Nizhnosulsky National Park. A place important not only for fish spawning in the Kremenchug Reservoir, but also for the nesting of many wetland birds.

On the other hand, changes in hydrological conditions will affect the fish population of both Irpen and the Kyiv Reservoir. In Irpen there are some rheophilic species of fish (those for which running water is important). Most of them are not in the current flood zone, but upstream. Currently, they will not be able to find the river conditions they need in the flooded part. In addition, migrants from the Kyiv Reservoir, including alien (invasive) species, will be more active in Irpen. They “consider” the expansion of the reservoir as an increase in the area of ​​their living space. Nothing unnatural. Thus, in Irpen, new alien species of fish may have emerged from the lower reaches of the Dnieper in a cascade of reservoirs. In addition, the Kyiv Reservoir may receive a number of invasive species, more common in Irpen. The introduction of new species is also possible, as there are many fisheries in the Irpen basin. Therefore, a certain balance that has developed for the fish population of both Irpen and the Kyiv Reservoir may be lost.

The accident on the dam on February 26, 2022 is likely to lead (and has already led) to negative consequences. We hope that infection through flooded landfills and latrine pits will be avoided, water and fuel pollution will be localized and neutralized in time, and fish from the Kyiv Reservoir will receive additional valuable spawning grounds.

At the same time, we are convinced that while the soldiers of the Armed Forces of Ukraine are fighting to stop the genocide of the Ukrainian people, the environmental front should take care to prevent ecocide.

New laws for the reclaim of protected areas by farmers!
3rd June 2022

Should the Oskil Reservoir be rebuilt after the war?
31st May 2022