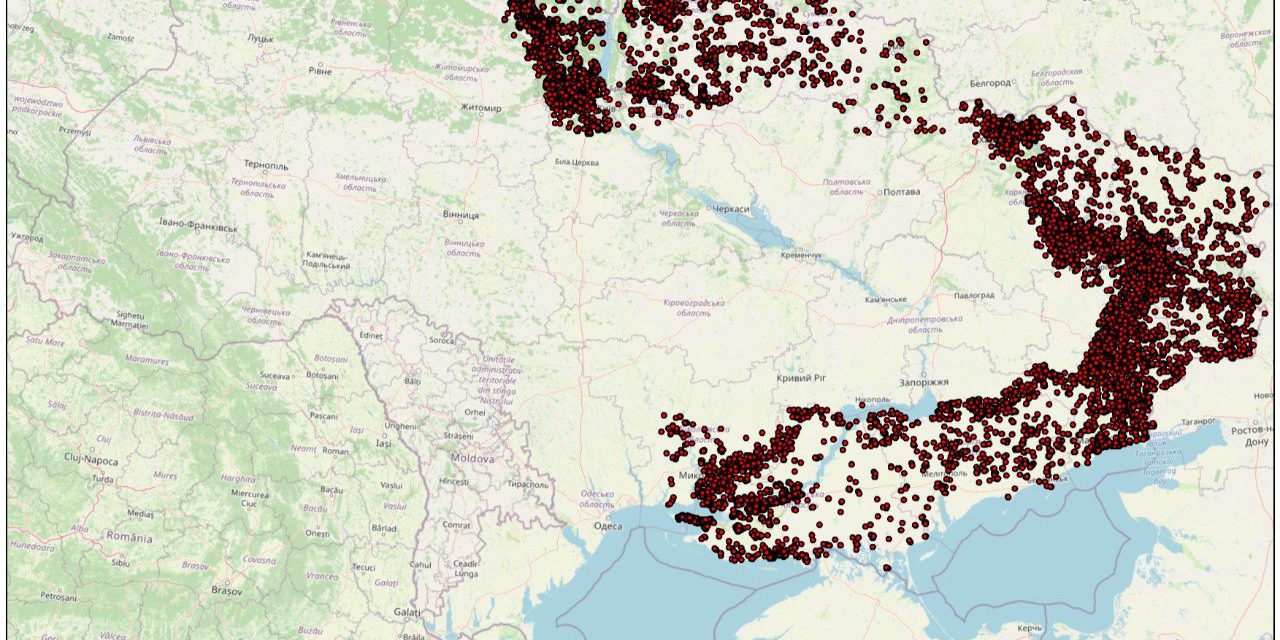 From the first day of the full-scale Russian invasion, the entire territory of Ukraine turned into a theater of hostilities. The influence of the territory, where all the following Russians and adjacent territories that were or are in the access zone of artillery and marked by shelling from the invaders, was especially noted. Predominant state used ammunition (from guided cruise missiles to mortars) for certain resources to fires in natural and agricultural areas. What can we say about special incendiary ammunition, which was repeatedly used by the Russian troops, and about the direct involvement of petroleum product storage facilities.

We have analyzed the data recorded by NASA satellites in natural and agricultural areas in the zone where a full-scale attack by invaders is taking place or is taking place and in the range of the most massive artillery means, exclusively with territories that have already been liberated.

From February 24 to June 23, 2022, at least 37,867 fires occurred in this zone as a result of shelling (satellites record only those temperature anomalies that last for several hours, so we are really talking about significant fires).

Using the means of spatial analysis, we established that the area of ​​the territory of Ukraine covered by the fire was 100662.2339 hectares (1006.62 km2). These territories are equally represented by natural ecosystems, as well as fields and settlements.

thus, according to our calculations, 36,154 hectares of forests and 10,250 hectares of grass ecosystems were destroyed by fire.

The areas with the greatest concentration of fire-affected forests should be especially noted: the outskirts of the cities of Severodonetsk, Lyman, Izyum, Sviatohirsk in the Luhansk and Donetsk regions, as well as the northern outskirts of Irpen, Buchi, Borodyanka and Makarov in the Kyiv region. The vast majority of all the forests burned during the 4 months of the war are concentrated here.

According to our calculations, actually every third hectare of Ukraine destroyed by fire is a protected area.

In an effort to reach realistic conclusions, we assumed that a fire center that lasts in natural areas for at least 3 years (such a gap is caused by the technological parameters of NASA satellite data) has a radius of at least 100 meters. Thus, we assume that the real volume of the territory affected by fires is even greater. All the more so as it will be possible to obtain detailed information through careful examinations of the materials of remote sensing of the earth and natural surveys of the territory. And this is already after the deoccupation…

We call on the EU and other countries to expand sanctions against Russian and Belarusian wood!
25th November 2022

What are the de-occupied objects of the nature reserve fund of Kherson and Mykolaiv Region?
21st November 2022

The territory of the Kamianska Sich National Park has been completely freed from the Russian invaders!
16th November 2022

THIS HAPPENED: RUSSIAN FOREST OLIGARCH KRUPCHAK IS ON THE SANCTIONS LIST!
25th October 2022