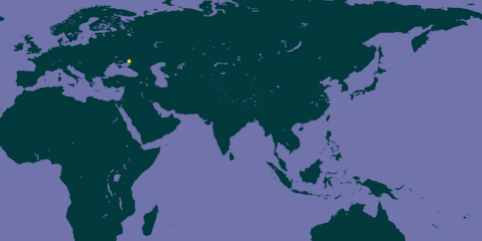 Extinction of rare species does not occur only in Madagascar, Australia or the islands of Indonesia. Plants, animals and fungi disappear forever in all regions of the planet where there is life. Extremely rare species also occur in Ukraine. The diversity of natural landscapes of Ukraine creates conditions for rare and endemic species, i.e. those that are distributed in very limited territories. Such species can only be found in one place and nowhere else on the planet. It is the presence of these species that makes the nature of Ukraine unique, different from all other regions of the planet. If we lose such species in their natural distribution, we will lose them forever.

On the map of the distribution of such species on Earth, it looks like this: 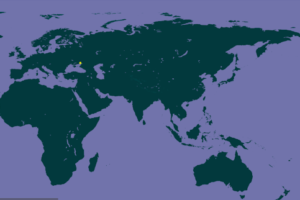 We have compiled a list of rare species of plants, the preservation of which was threatened by russia’s war in Ukraine. In the territories occupied by russia and where large-scale shelling is taking place, there are indeed plants that are not common anywhere else in the world.

All of these are unremarkable species that journalists do not write about and whose fate is usually only interesting to biologists and reserve workers.

Why is the conservation of such species under threat? Military actions lead to the powerful action of several factors that have a detrimental effect on vegetation, fungi and lichens:

the destructive effect of explosions, the passage of military equipment and the construction of fortifications;

fires formed as a result of the action of ammunition, which no one extinguishes in the conditions of military operations.

chemical pollution (in more detail) and, above all, pollution of soils with sulfur, which destroys the seeds and roots of grasses with the formed sulfuric acid when in contact with water.

To illustrate the long-term impact of chemical pollution from explosions, we will use the sites of russian military exercises on the Kerch Peninsula of Crimea. Such an effect can be compared to highly concentrated acid rain.

The physical effects of explosions and techniques, which seem to be the least destructive for plants, create far-reaching threats in the form of erosion, changes in the hydrological regime, and numerous “springboards” for the spread of invasive plants, which take over damaged areas much faster than natural vegetation is restored. Therefore, military actions directly destroy vegetation and indirectly destroy natural habitats. For endemic and rare species, each of which requires specific growth conditions, such changes can be fatal. Destruction of exactly those places where each of the listed species is found can mean its disappearance in that area. We are talking almost exclusively about steppe species, which, due to large-scale plowing, got rid of almost all territories where they could be common (no more than 3% of the former volume of steppe ecosystems remained in Ukraine).

For example, Centaurea breviceps and Centaurea paczoskii grow on the Kinburn spit, which has been experiencing large-scale fires for 2 months (more details). And CENTAUREA pseudoleucolepis and Achillea glaberrima are found only in an incredibly small area of ​​the  Stone Graves reserve in Donetsk region. There were no hostilities here yet.

For example, let’s mark on the map the distribution of the short-headed cornflower on the Kinburni and Nizhny Dnieper sands and mark those localities that burned during fires only in April 2022.

The compiled list includes only species from the Red Book of Ukraine. Protected areas are created for their protection and responsibility is provided for their destruction. However, there are other biological species that are common only in this danger zone, the lists of which we plan to compile in the future.

Also, we did not include Crimean species in the lists, although Crimea itself is the largest center of endemism on the territory of Ukraine. 44 species of plants occur only in Crimea and nowhere else in the world. But there are no hostilities in Crimea, and we hope that the deoccupation of the peninsula will not take place through military means.

We expect that the species on our “alarm” list will not be completely destroyed and plan to study the state of their populations after the liberation of the temporarily occupied territories of Ukraine.